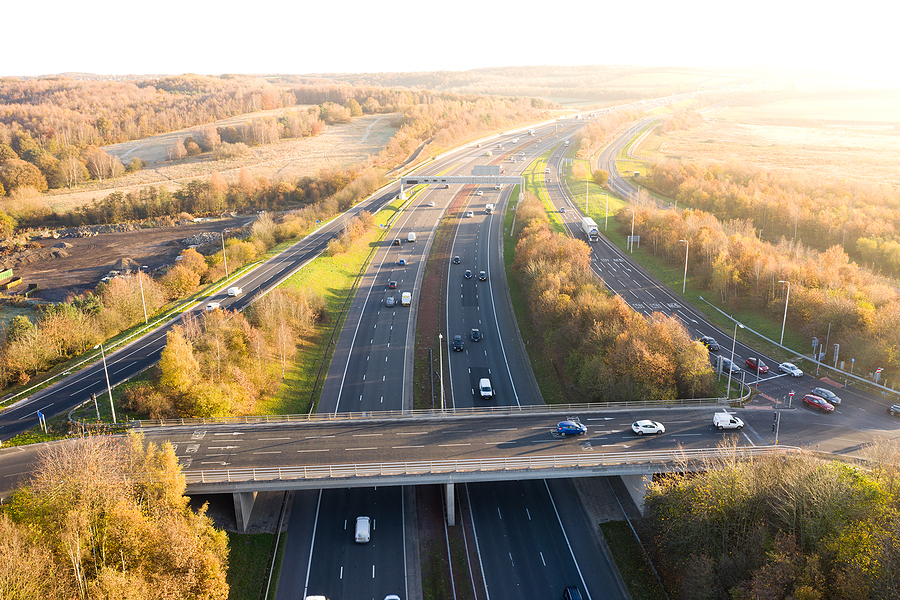 Where Is Britain’s First Motorway?

All roads, however big or small, need to be well surfaced to ensure the safety of all road users, and road surfacing contractors are a key part of ensuring this is the case for both small drives and byways to larger carriageways.

However, whilst some of Britain’s roads can be traced back to Ancient Rome, one of the biggest and most heavily used parts of the road network is a far more recent invention, and whilst it would create a national network of high-speed roads, was constructed to fix a relatively local issue.

In the 1930s, one of the most congested roads in Britain was the A6, particularly the route that passed through the town (now city) of Preston. The problem was even more acute during events in the North West such as the annual Blackpool Illuminations.

By 1938, the route for what would eventually become the Preston By-pass (now part of the M6) between Bamber Bridge and Broughton had been planned and designed by engineer James Drake, although it would take over a decade to gain approval from Lancashire County Council.

Part of the reason for this is that in the eyes of the law, roads could not be made that could not be used by certain kinds of traffic, which according to the law that would eventually change this included animal-drawn carriages, pedestrians, bicycles and military vehicles.

This would change in 1949 with the Special Roads Act, and the first test of the new regulations and the new concept of a car-only road would be the Preston By-pass.

Interestingly, once the plans were finally made public and a scale model was produced to showcase the new road, very few formal objections were raised, all of which were resolved personally by Lancashire County Council and the surveyor.

After nearly another decade, the by-pass opened on 5th December 1958 by then-Prime Minister Harold Macmillan at a cost of nearly £3m (£70m adjusted for inflation), and Mr Macmillan himself became the first person in Britain to travel on a motorway.

It lasted 46 days before having to be closed for emergency resurfacing work. 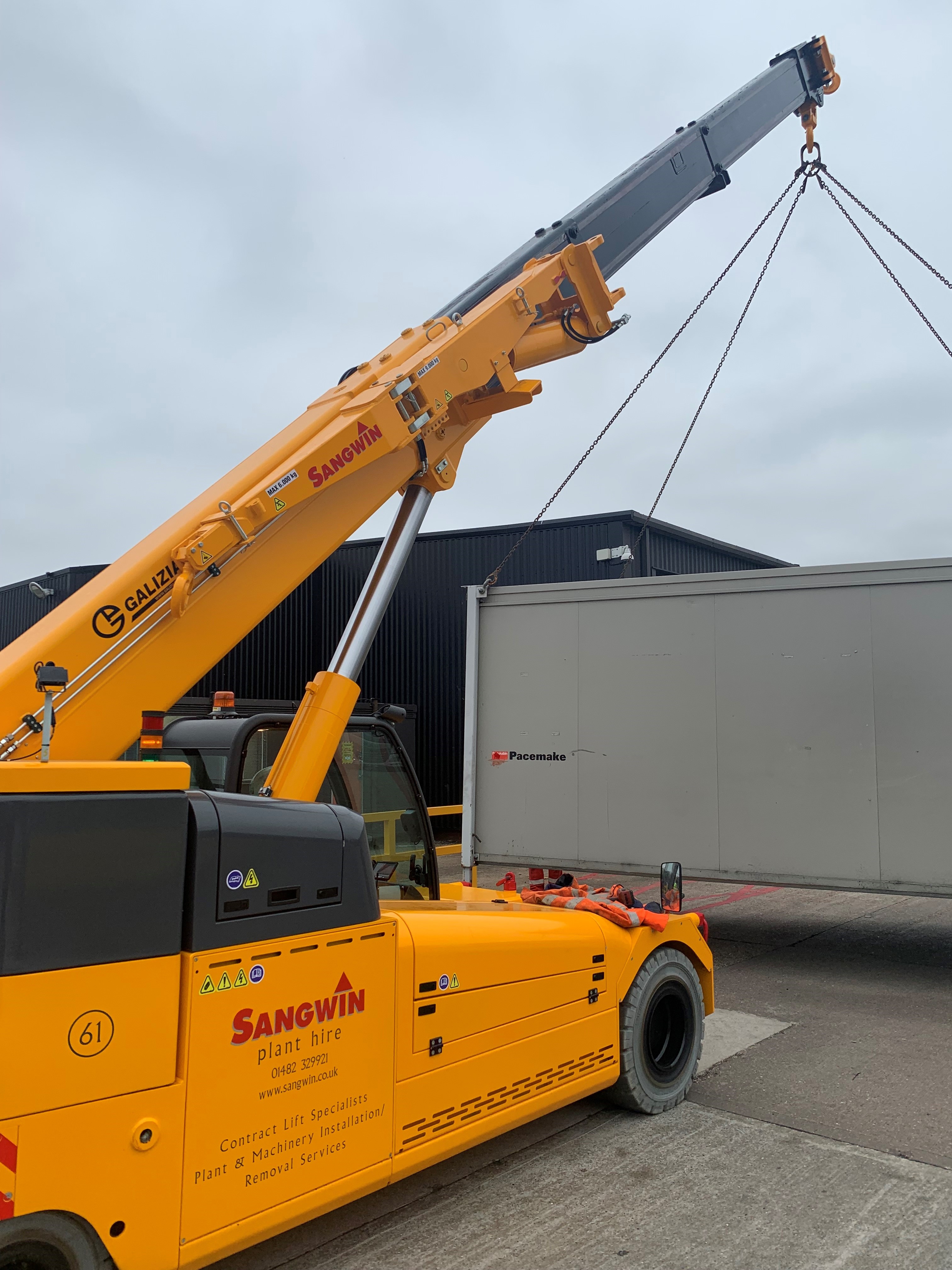 The Most Famous Cranes In The World

As one of the most important pieces of heavy machinery used in construction, a crane hire is often at the epicentre of world events, the construction of landmarks or major rescue missions, which can turn ordinary people and machines into an indelible part of history.

Here are just some of the most famous cranes in the world.

Arguably the two most famous gantry cranes in the UK, if not the world, Samson and Goliath in Belfast, Northern Ireland became a symbol of stability during deeply unstable times.

Named after the two biblical giants and situated at the docks of Harland and Wolff, one of the biggest shipyards in the UK and the place where the Titanic was constructed, the 96m tall Goliath was built in 1969, whilst the slightly taller 106m tall Samson was completed in 1974.

They became a symbol of a potential brighter, more stable future for the region during a time of political strife and a changing industrial landscape that put Harland and Wolff in trouble. Samson and Goliath were a symbol of confidence in shaky times and outlived the shipbuilders themselves.

Harland and Wolff would enter administration in 2019, but found a buyer for the company in the form of the energy firm InfraStrata, which focused on expanding their offshore renewable energy industry.

Ever since its construction in 1967, the crane at Harlingen Harbour has been a beacon that has watched over the shores of the Netherlands and tow unloaded cargo ships, but what has turned it from a fascinating local landmark to one of the most famous cranes in the world is its second life.

After it fell into disrepair in the late 1990s, a team of enthusiasts painstakingly restored the Harbour Crane, but since it was no longer needed as a crane, they came up with a rather fascinating alternative use.

They converted the control cabin into a single hotel room with a roof terrace and a rotatable view, which has given the crane a reputation for being one of the most unique romantic places to stay in the world, with a view of the dock that can be rotated at will.

One of the single most famous cranes in the United States, Weeks 533 is the largest revolving floating crane on the East Coast of the US and due to its size and 454-tonne capacity has been used in several famous lifts and construction projects.

Whilst initially used to lift the deck sections of the San Mateo-Heyward bridge, the vessel formerly known as the Marine Boss before its extensive renovation in 1997 has been part of some exceptionally notable lifts and construction projects around the USA.

The crane took both Concord and the Space Shuttle Enterprise to their final resting place at the Intrepid Sea, Air and Space Museum, it helped to lift US Airways Flight 1549 after it crashed into the Hudson River, and has helped put vital infrastructure in place after Hurricane Sandy and 9/11.

Because of this, whilst it has done jobs throughout the country, it is primarily connected to New York and New Jersey. 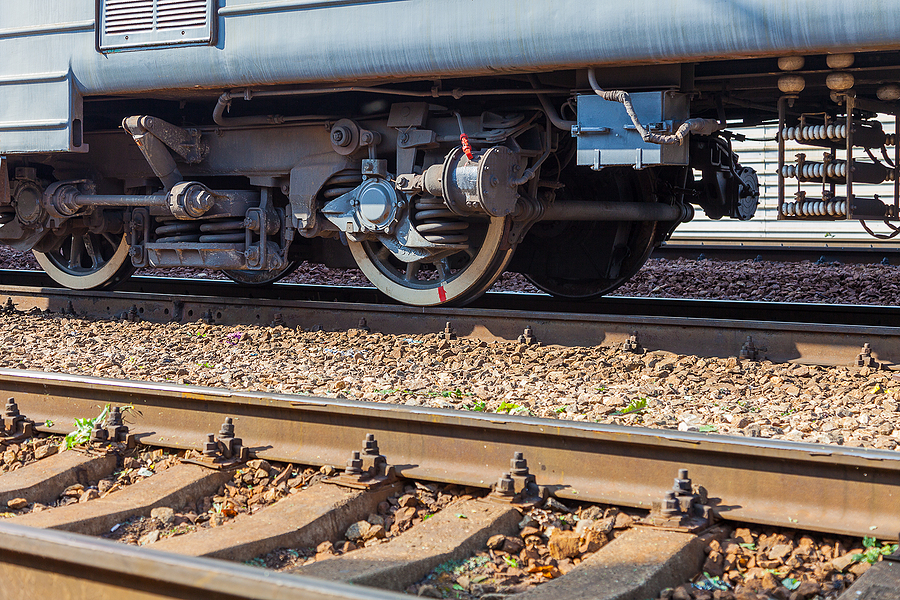 The HS2 rail project has reached a major milestone in the construction of the UK’s largest railway bridge, as work begins on the first of 56 giant concrete piers that will support the Colne Valley Viaduct.

Construction Review Online reports that the 3.4km long viaduct will carry high-speed trains at speeds of up to 200mph between the outskirts of Hillingdon and the M25, before heading north to Birmingham and the North of England.

The 6-metre high reinforced concrete pier was cast on-site by a team of engineers who used specially-designed formwork to create the shape of the structure.

Each of the 56 piers is designed to support the full weight of the deck and rest on piles that go 55 metres into the ground. A total of 292 piles and 56 pile caps across the length of the viaduct will be required.

Construction of four jetties across the lakes has also been completed, allowing contractors to get equipment into position to support the construction, which also helps remove heavy vehicles from local roads.

HS2 Ltd’s project client, David Emms, said: “The Colne Valley Viaduct will be one of HS2’s most iconic structures and it’s great to see how much has been achieved already. I’d like to thank the whole team for the huge amount of work they’ve done to get us to this point.”

Align’s project director, Daniel Altier, said that he had no doubt that the viaduct will become one of the most striking elements of HS2, and explained that its construction will be of interest to engineers of all ages.

He said that the deck sections were manufactured at the main construction site to the west of London, and the deck will be formed from north to south using a huge launching girder, also helping to keep construction traffic off local roads.

The Colne Valley Viaduct has a series of elegant spans, some up to 80-metres long, carrying the railway around 10-metres above the surface of the lakes, River Colne and Grand Union Canal.

Wider spans will carry the viaduct above the lakes of the Colne Valley, while the narrower spans are for the approaches.

The chosen design of the viaduct enables tuning views across the landscape and minimises the viaduct’s footprint on the area.

To cut carbon across the construction of HS2, the design and construction teams working on the viaduct have also cut the amount of embedded carbon in the viaduct by around a third, by narrowing the width of the structure and applying lessons for the design of high-speed railway bridges in Europe.

Over the last six years, HS2 has worked closely with Affinity Water and the Environment Agency to monitor water quality and agree on working methods. These are being monitored by a team of specialist engineers during construction to protect the natural environment.

If you’re looking for plant hire in Hull, talk to our team today. 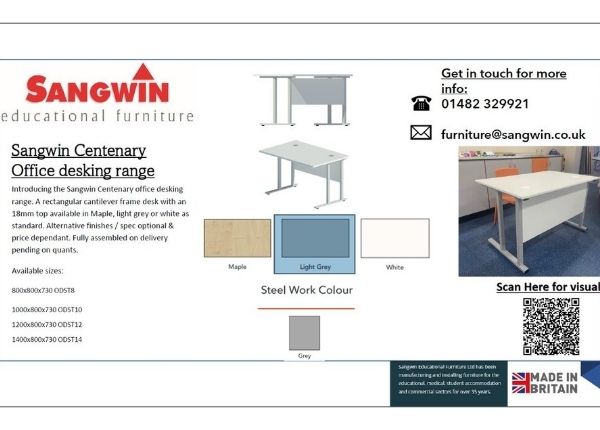 As Sangwin Educational Furniture continues its growth, it is delighted to announce the manufacture of its own Loose Furniture range. The Centenary range, aptly named after Sangwin’s long history dating back over 100 years, is being manufactured in its own purpose built factory with its own logistics team.

Will Sangwin comments that “we are delighted to expand our furniture range on the back of continued success and in line with our future growth plan. Not only do we offer a quality product but it is competitively priced and provides purchasing convenience for our customers”.

For all enquiries please email us at furniture@sangwin.co.uk. 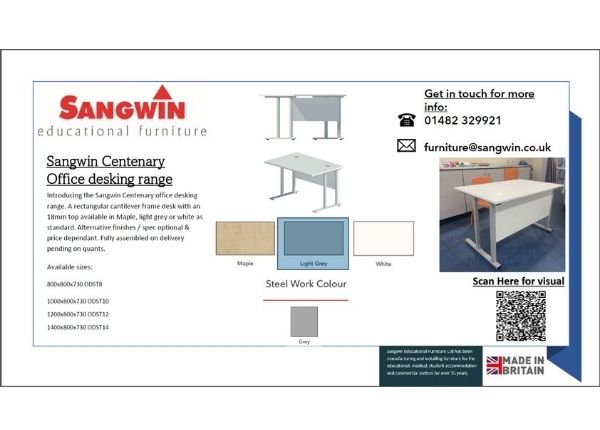 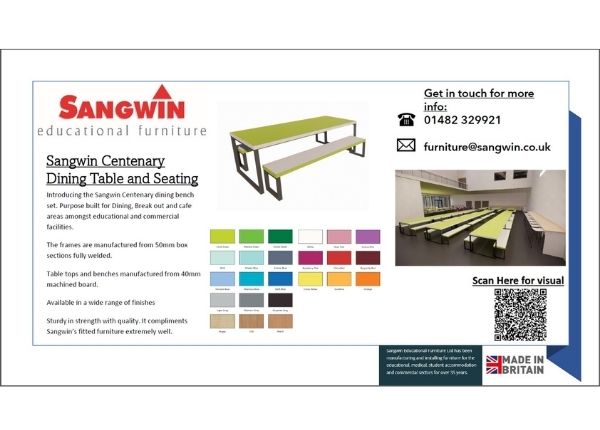 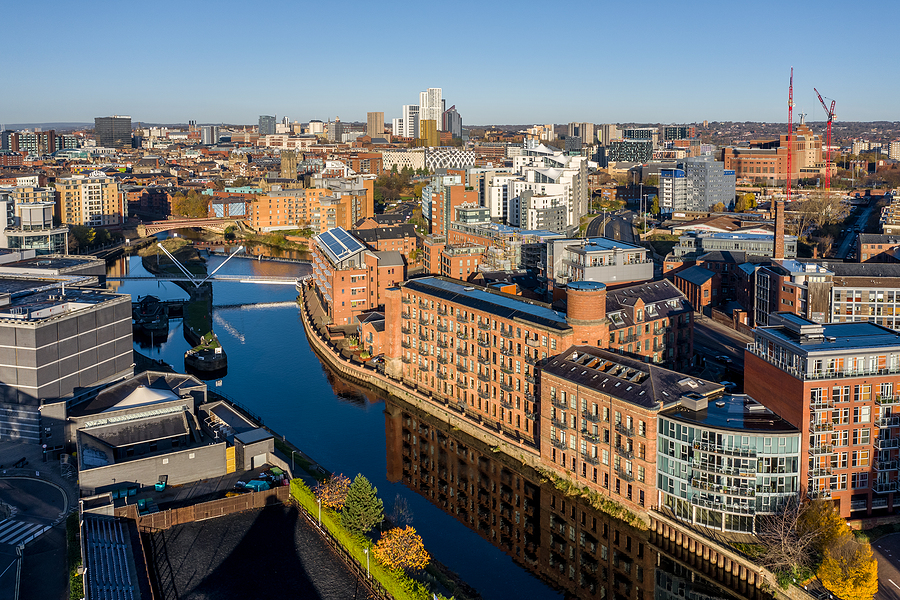 A major residential-led mixed-use project in Leeds has been granted planning permission, finally providing a new use for a site that was cleared in 2008.

The 2.8 acre site on Lisbon Street in the city centre used to be home to the Leeds International Swimming Pool, a facility that was notorious for being just centimetres too short to be counted as an Olympic pool. The 1960s structure was demolished in 2008 and was to make way for a new skyscraper, only for the project to be cancelled due to the impact of the financial crisis.

Since then it has been used as a car park, but now the site will be redeveloped by the partnership of Marrico Asset Management and Helios Real Estate. The £270 million scheme will involve four high rise buildings, of 15, 22, 24 and 33 storeys respectively.

Work should now start in the spring on the first two buildings, of 22 and 33 storeys, which will contain over 600 apartments on a build-to-let basis. This will be followed by the 24-storey student accommodation block with around 550 beds, and a 15-storey aparthotel.

In addition, there will be 150,000 sq ft of commercial space, plus leisure and retail facilities, while around half of the footprint of the site will be landscaped with gardens and open space, bringing much-needed greenery to the city centre.

The need for crane hire in Yorkshire has grown in recent years due to the increase in the number of tall buildings in the city, and the Lisbon Street cluster may add significantly to this.

At present, Leeds has three buildings fitting the definition of a skyscraper of being over 100 metres tall. All three are 21st century constructions, with the tallest of all, the 114 metres (374 ft) Altus House, being completed this year. According to Emporis, 12 of the 20 tallest buildings in Leeds were built since the turn of the Millennium.

While this figure is less than some cities, such as Manchester, Leeds is leading the way in Yorkshire. Sheffield has the only other building stall enough to be given skyscraper status, the 101 metre St Paul’s Tower. Below this level, however, Sheffield’s present skyline also owes much to 21st century construction, which accounts for 11 of its 20 tallest buildings.

These two cities contrast with Bradford, where the 19th century city hall is the tallest building at 66 ft (216 ft), the only building above 200 ft in the city. None of its 20 highest buildings has emerged since the 1970s.

A key question for Leeds is whether the growth of the city will continue or slow down after the announcement that the HS2 connection has been cancelled, a move softened by the news that it will finally get a long-awaited tram system to match those of Sheffield, Manchester and other cities.

Reflecting on the development, Marrico partner Mark Barnes expressed optimism that the Lisbon Street project will help bring further investment to Leeds city centre. He remarked: “The scheme will reinforce the confidence in the continuing regeneration of the area, acting as a catalyst for further ongoing investment and regeneration."